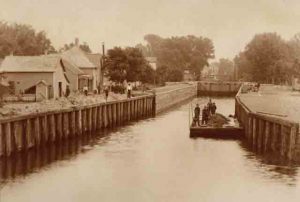 The historical distinction of Portage lies in its unique geographical location between the Fox and Wisconsin Rivers.  Here, the two rivers, one flowing north to the St. Lawrence, the other south to the Mississippi, are separated by a narrow neck of land over which, for two centuries, Indians, missionaries, trappers, traders, adventurers and settlers traveling the waterway had to portage their canoes and heavy packs from one stream to another.  The settlement which grew here because of the resulting traffice was first knows as "Wau-wau-onah", Winnebago for "carry on the shoulder".  During the French occcupation, it was simply "le portage" (from porter: to carry).  This was eventually anglicized to Portage.

So far as we know, the first white men to visit Portage were the exploreres Fr. Jaques Marquette and Louis Joliet who portaged here on June 14, 1673, en route to exploring and mapping the upper Mississippi.  They were followed by Hennepin and Duluth, who left blazed crosses on the trees and by Perrot, LeSeuer and Jonathan Carver, who found a busy portage business in furs being carried on here by Lauant Barth.  Barth arrived in 1792, built a trading post and carried on the first transport activity.  He was the original permanent settler.  He was followed by Jean Lecuyer, son-in-law of Chief Dekorra, who handled the Fox terminal with a team of oxen.  In 1810, Francis Leroi took over the entire business enterprise.  Large keel boats bateaux and canoes often weighing 10 ton, could be dragged over the mud and bog for $10 empty, plus $.50 per 100 lbs. of merchandise.

In 1824, the Prairie du Chien headquarters of the American Fur Company hired Pierre Pauquette, a man of French and Indian descent, to manage its affairs here.  He was a giant in stature and strength, and because of his honesty and integrity,

was trusted by Indian and white men alike.  He could speak both Winnebago and French fluently and became invaluable to the government as an interpreter at treaties and councils.

With the American occupation of the Northwest Territory, the government began to protect its interest by building a string of forts along the now famous Fox/Wisconsin water route.  Indian resentment over invasion of their lead mine regions and their exorbitant tolls levied on transport goods resulted in the establishment of Fort Winnebago in 1828 to ensure peace and fair business practices.  Major David Twiggs was the commander under who served West Point graduate Jefferson Davis.  His assigned duty was to cut the logs for the barracks which he floated down the Wisconsin River and hauled across the portage by ox teams.  Davis later became President of the Confederacy.

With the end of the Blackhawk War, European immigration brought to Wisconsin a flood of settlers eager for cheap land.  The portage point continued in importance for trade and transportation and Portage itself grew rapidly as a thriving farm community.  A canal was finally cut between the rivers, but the new railroad that came through in 1857 already became a vigorous rival.  The canal never reached its anticipated peak as a commercial highway.  It was closed to traffic by the government in 1951 for lack of use.  The lumbering industry brought a tide of hardy woodsmen and rivermen to Portage during its heyday.  Here they began their trek north or stopped here for rowdy pleasure and relaxation on the route southward on their Wisconsin River rafts.

Agriculture took over the lumbering days, but Portage has enjoyed its share of industry too.  Today the city is a progressive community treasuring the story of its past and anxious and willing to share it with visitors and guests. 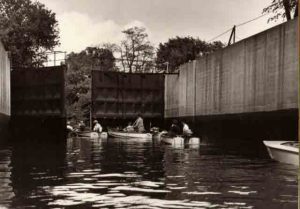 Portage achieved Certified Local Government (CLG) status in 2007.  The Historic Preservation Commission consists of community members, appointed by the Mayor and approved by the Common Council, which serve to recognize, educate, and preserve the historic and cultural resources within the City of Portage.  The Historic Preservation Commission normally meets monthly on the third Tuesday of each month at 6 p.m. in Conference Room One of the Municipal Building.